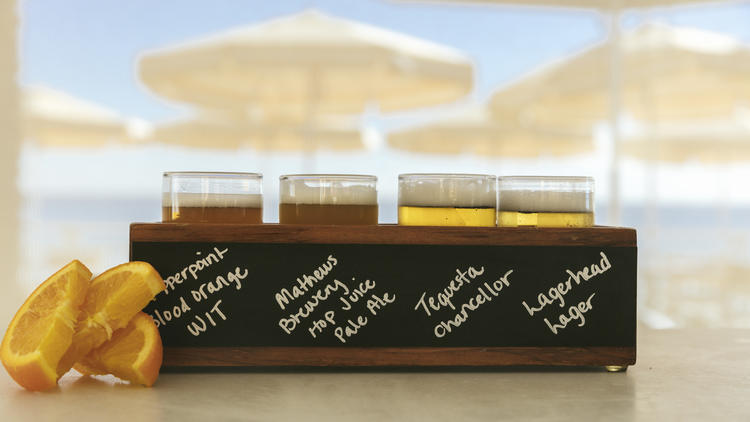 Technically speaking National Beer Day is Sunday, April 7. But are we really going to hold it against the Eau Palm Beach Resort and Spa if they celebrate a day early on Saturday?

The 4th Annual Tap Takeover will take place at the Manalapan property from 11 a.m. to 5 p.m. on April 6. The event is free to attend, but guests need to register online at Eventbrite.com/e/4th-annual-tap-takeover-tickets-57738606727. There is also free valet parking at the resort and metered parking in the Lantana Beach parking lot.

For the third year there will also be a Brewmaster’s Dinner at the resort’s Angle Restaurant with hand-crafted beers paired with a five-course meal (a different brewery for each course). Tickets for the dinner are $99. To reserve a ticket, go to Eventbrite.com/e/brewmasters-craft-beer-dinner-tickets-57739500400.

“We wanted to step outside the box of your typical oceanside dining event and promote award-winning breweries in our back yard while teaching guests that craft beer can be a luxury experience,” explains Brian Long, the assistant manager of food and beverage at the resort. “I think the event has been successful because it gives the guests the opportunity to interact with local brewers in an authentic and intimate setting, all the while enjoying some of the best brews and views South Florida has to offer.”

Long — who is also the resort’s cicerone, or beer sommelier — says that they didn’t have to go far to look for breweries. “Luckily for us, the breweries in our back yard have held a commanding presence on local, regional and national levels. We have also collaborated with breweries like Due South to create custom brews such as Eau Palm Beach’s Lagerhead Lager.”

• One Door East is offering $3 beers all day long on Monday, April 8, for those taking a little “hair of the dog” after the official National Beer Day on Sunday. One Door East is at 620 S Federal Highway, Fort Lauderdale. OneDoorEast.com.

• Shooters Waterfront is serving their Shooters Ale for $7 on April 7. The custom red ale was created by the by Biscayne Brewing Company. Shooters is at 3033 NE 32nd Ave, Fort Lauderdale. ShootersWaterfront.com.

• Kitchen 305 inside the Newport Beachside Hotel and Resort on April 7 will serve local beers, including Hollywood Brewery Amber for $6 and Hollywood Brewery Pineapple for $7. The Newport is located at 16701 Collins Ave., Sunny Isles Beach. NewportBeachsideResort.com.

• Casa Sensei will serve Asian imports on April 7 such as Asahi, Kirin Ichiban, Kirin Light. Sapporo and Lucky Buddha. They will also offer a cocktail called the Asian Chelada, which will be made of lime juice, a five-spice salted rim and an Asian Beer of your choice on ice for $12. Casa Sensei is located at 1200 E Las Olas Blvd. #101, Fort Lauderdale. CasaSensei.com.

• Batch New Southern Kitchen and Tap will have beer specials all day long April 6 and 7. And Copperpoint Brewery will be onsite and having giveaways. Batch is located at 223 Clematis St., West Palm Beach. Facebook.com/events/1994535730852995.

You can get a discount on Lyft rideshare service on Sunday, April 7. J) to and from participating breweries. To see a list of which breweries are a part of the offer, go to the blog at Lyft.com.

Also there will be a discount for trips to and from breweries throughout the spring, specifically from April 8-July 6 if you put in the code “FLGUILD19” for 25% off (up to $5 each).

The offer is from a partnership with Lyft and the Florida Brewers Guild.